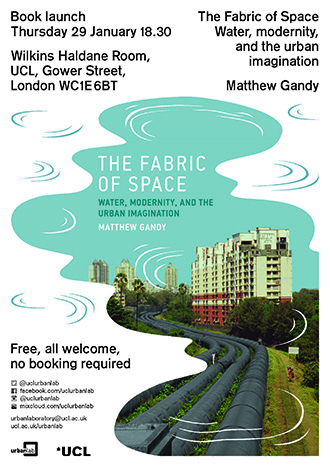 Book launch: The Fabric of Space: Water, Modernity, and the Urban Imagination

The Fabric of Space: Water, Modernity, and the Urban Imagination (MIT Press, 2014) considers the cultural and material significance of water through the experiences of six cities: Paris, Berlin, Lagos, Mumbai, Los Angeles, and London. Tracing the evolving relationships among modernity, nature, and the urban imagination, from different vantage points and through different periods.

To celebrate the launch of Matthew Gandy’s new book, join us on the evening of Thursday 29 January for a special launch event in the Wilkins Haldane Room of UCL.

Matthew Gandy is the founder of the Urban Salon, a Professor of Geography at University College London and former director of UCL Urban Laboratory (2005 – 2011). Until the summer of 2015 he will be a Senior Research Fellow of the Gerda Henkel Foundation at the University of the Arts, Berlin. His last publication was the co-edited collection The Acoustic City (Jovis, 2014), launched in London as part of UCL Urban Laboratory’s irregular live music evening Stadtklang. The book will be available to purchase at the launch.