Noise Of The Past – A Poetic Journey of War, Memory & Dialogue

Noising the Past: event as intervention

Abstract: Representing a disruptive noise to the performative enactment of the nation in stone, sound and ritual, it is now widely recognised that some stories and bodies have been drummed out of war and remembrance. Through co-production, the project which this paper reflect on, explored how the noise of the past can be put into play in a series of interactions that make it possible to remember and converse beyond nationalistic and militaristic consensus. The research direction set in play a cultural production that was a dynamic exchange between the researchers, artists and postcolonial generations on war and national memory.

Centrally the project innovated methods of exchange and collaboration using the dialogicmode of call-and-response. Methodologically activating a multiculturalencounter, ‘Noise of the Past’ publicly conversed with multi-sensory modalitiesof poetry, historical documents, music and visual art. This collaboration unleashed tension and incommensurability to produce new configurations of open-ended belongings to the nation. A new film titled Unravelling (17 min, 2008, dir K. Powar) was produced by the project with a new and original scoreby the composer Nitin Sawhney. In addition, Francis Silkstone score andconducted Post-colonial War Requiem. Both pieces were launched in Coventry Cathedral on 8th November, as a major public intervention in accepted codes of national remembrance. In an exploration of how to imaginatively engage with everyday life, as aural and visual participants, the installation moved between the dissonance of ‘noise’ to the imagined purity of the nation. It operated with discrepant and yet intertwined chords of sound, visual texture and stone to prompt how encounters can be brought into a tactile play of the past in the present. 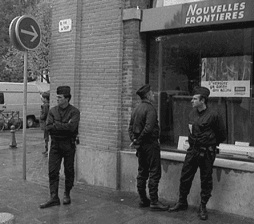 Aesthetics, Ideology and the City

How can we think of ideology as an aesthetic affair?  My paper engages with this question through an examination of the rise of the so-called ‘securitarian ideology’ in France roughly within the last decade.  I first visit the debates surrounding this seemingly old-fashioned notion of ideology to spell out some of the difficulties surrounding it.  Despite these difficulties, however, I argue against the abandonment of the notion and point to its significance as a critique of social closure and alleged self-evidence of facts that allow for such closure.  Building on Jacques Ranciere’s notion of ‘sensible evidences’, I present an interpretation of ideology as an aesthetic affair; that is, ideology not merely as a collection of discourses or a system of ideas, but as the reconfiguration of the very space in which these are described and articulated.