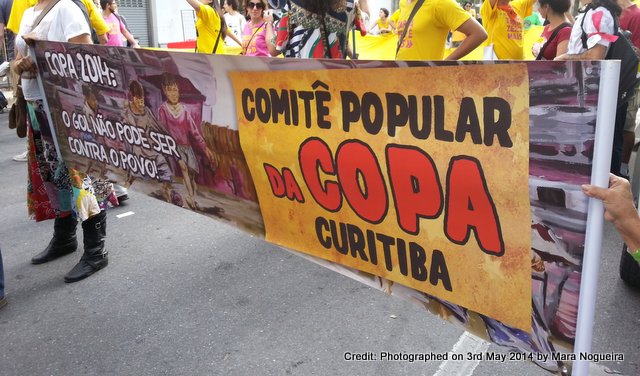 An anatomy of resistance: the popular committees of the World Cup in Brazil

This talk will explore the formation, composition and political actions of the Comitês Populares da Copa (CPC), Popular Committees of the World Cup, that formed in twelve Brazilian cities in anticipation of the 2014 World Cup. The CPC was the largest network of resistance movements ever assembled for a sports mega-event and contributed to the discourse of resistance and radical street actions that marked the 2013 FIFA Confederations’ Cup. Each of the twelve nuclei was independent of the others but communicated and coordinated through an umbrella organisation called the Articulção Nacional dos Comitês Populares da Copa (ANCoP), National Articulation of Popular Committees for the World Cup.

Beyond incommensurability, methodological regionalism and the Global North/South divide: the challenges of thinking Naples as an ordinary city

For centuries Naples has been been viewed by foreigners, Italians and Neapolitans themselves to be something of an urban exception. Especially since Italian Unification, the city has been persistently diagnosed as a backward and undeveloped metropolis that lacks the accoutrements of urban modernity and civility. The image of an aberrant city has not always been seen in a negative light: Walter Benjamin and Asja Lacis, for example, identified in Naples a primordial and ‘porous’ urbanism that offered a seductive alternative to the northern European urban life.

The city thus provides a fascinating case for thinking about comparative urbanism and, I would argue, for interrogating assumptions about the ‘place’ of postcoloniality and Eurocentrism in urban-theory debates. My presentation will consider different approaches that have either directly engaged with or might be applied to address Naples’s particularities: from anthropological research on the city and revisionist histories of the Italian Mezzogiorno to Greek geographer Lila Leontidou’s broader proposal for a ‘Southern (European) urban theory’. While these approaches all take issue with orthodox representations of the city, at the same time they tend to reinforce local and regional perspectives that ultimately limit the contribution that this nominally Western city can play in the project of postcolonializing urban studies. I want to suggest that the idea of ‘ordinary city’ offers a possible route out of this impasse: it renders Naples more conducive to intra-city comparison but also alerts us to its own internal ethnocentrisms and conflicts. In order to demonstrate the urgency for such a shift in perspective, the second part of my presentation will trace the global media’s misrepresentation of the city’s recent rubbish crisis as the unrepeatable consequences of organized crime and toxic waste dumping. Insisting upon Naples and its trash as ordinary not only works to repoliticize the breakdown of waste governance and offer lessons for elsewhere, it also raises interesting implications for imagining a cosmopolitan urban theory beyond the Global North-South divide.